Pan-Afrikan Reparations Rebellion Groundings
What We Are Demanding:

We are not Marching this year because we always knew that we could not March forever, furthermore we have listened to our respective supporting organisations and communities who have been calling for more effective tactics in drawing attention to our cause.

We have instead chosen to lock-down Brixton because WE are not being HEARD in our demand for the UK Government to establish the All-Party Parliamentary Commission of Inquiry for Truth & Reparatory Justice (APPCITARJ) and to commit to holistic reparations taking into consideration various proposals for reparations in accordance with the United Nations Framework on a Right to a Remedy and Reparation, as being called for by the Stop the Maangamizi Campaign.

The terms of reference for the APPCITARJ should be to study the impact of the United Kingdom’s Transatlantic Traffic in Enslaved Afrikans on social, political and economic life within the UK and the rest of the world in order to begin understanding the legacies of enslavement on individuals, communities and the society we live in and commence a dialogue on how to address it, which go further than a symbolic apology.

The APPCITARJ’s work should be of a participatory nature, calling for submissions from all those with knowledge of the nature and impacts of enslavement and colonialism. This will aim to include, but not be limited to, testimony from: individuals, organisations, academics, communities, and nations. Affected communities and individuals must have their own voice, agency, and self-determined solutions in effecting and securing Reparatory Justice and steps must be taken to facilitate their participation in any reparatory process in which the UK Government, State and Society are engaged. 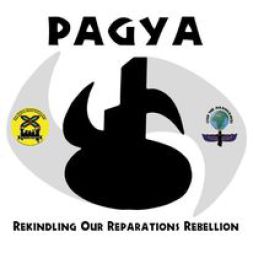 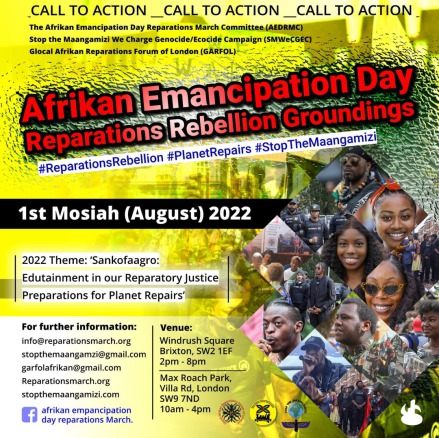 Get Ready for the Pan-Afrikan Reparations Rebellion Groundings (PARRG) 2022!

The main purpose of the PARRG is to showcase our Afrikan Heritage Communities Self-Repairs initiatives locally, nationally, and internationally and to demonstrate that the achievement of Maatubuntuman in Ubuntudunia (Our future Nation borne from a liberation fight resulting in global justice and a repaired planet for all), as an overarching strategic goal of our Pan-Afrikan Reparations for Global justice organising efforts, IS possible!!

Only When We Become Powerful Will We Become Again A Global Nation Worthy of Respect! Therefore our Community Self -repairs efforts are as important as holding Maangamizi perpetrating criminals to account! Self - Repair and Securing Reparatory Justice are equally important and must be done together and involve us all who identify as Afrikan and seek National Self -Determination.

1st Mosiah is about showcasing both these dimensions of our quests for Justice - not just in the UK but internationally. 1st Mosiah is about you making a commitment to becoming more involved  in this work throughout the year, not just the one day. So reach out to us, let's get the work going in your city, region, borough and country. 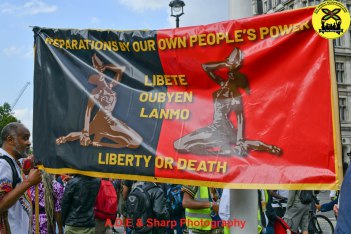 This year's theme is centred on the many ways we will showcase our works, key messages and achievements. This has been formulated by an intergenerational planning team of young people and adults and will demonstrate the local and global (glocal) movement building work whilst expressing our need to do more! Sankofaagro is not a call to be entertained but is a way of making a call to action to our young people who we must nurture to continue this work.

The theme is a compound of 2 words in twi and ewe languages in West Afrikan: Sankofa - Go back and fetch it (Twi) and Agro Play/Entertain (Ewe) 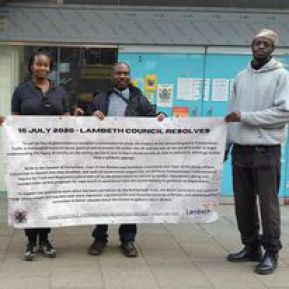 Programme for the day 1st Mosiah 2022

The best way to keep abreast of the activities and achievements of the International Social Movement for Afrikan Reparations (ISMAR) is to be part of it!

We will not get a sense of the totality of the work just by turning up for one day and then lamenting the lack of numbers or vibes on the day. The UK has always had a Pan-Afrikan approach to this grassroots movement which means fighting for our power base Afrika and her Diaspora wherever we are. We cannot be concerned just with our people in the UK, a mere 3% of the UK population. Neither can we not connect our quest for reparatory, environmental and cognitive justice (referred to collectively as Planet Repairs) to our homeland and power base Afrika from which much or the resources that prop up the greedy inhumane global north, come from. So, it is necessary to have a glocal (local and global) approach which our campaign partner, the Stop the Maangamizi: We Charge Genocide/Ecocide! Campaign (SMWeCGEC) and her affiliated structures has been concerned with.

Securing Planet Repairs requires us to use all methods at our disposal including, legal, political, parliamentary, social, economic and revolutionary means. It has meant taking our fight into hostile institutional spaces, educational institutions, community spaces, social media spaces and taking up space on the streets. It has meant numerous public speaking and media appearances, international travel (Europe, Abya Yala and Afrika), attending public meetings and making representations, creating and disseminating our own messages and challenging power structures on their own turf. This you will not see just by turning up on 1st Mosiah and cannot be achieved just by Afrikan Heritage People talking amongst themselves! There is a need to hold perpetrators to account (the external dimension of reparations) AND challenge ourselves to be the reparatory justice change-makers we are seeking (the internal dimension often referred to as community self-repairs).

Since the first Afrikan Emancipation Day Reparations March in 2014 the SMWeCGEC has:

• Collected over 20,000 signatures for the Stop the Maangamizi petition which calls for an All-Party Parliamentary Commission of Inquiry for Truth and Reparatory Justice into the LEGACIES of Afrikan enslavement, colonisation and neocolonialism. Have you read and signed it? Click here to read and sign it

• Through working as part of the Europe NGO Consultative Council for Afrikan Reparations (ENGOCCAR) has a version of the petition for lodging at the European Parliament and had it translated into Dutch, French and German.

• Contributed to establishing an Afrikan Reparations Transnational Community of Practice for Action-Learning about Reparations (ARTCoP).

• Through the Pan-Afrikan Reparations Coalition of Europe (PARCOE) developed a critical analysis of the CARICOM Reparations Initiative.

• In association with PARCOE and the Global Afrikan Peoples Parliament developed a position on the CARICOM Reparations Initiative alternative approach to reparations.

• Convened a meeting with UK based reparations activists of International Social Movement for Afrikan Reparations (ISMAR) to interface with the CARICOM Reparations initiatives of the Jamaican National Council on Reparations regarding how best to jointly work together recognising differences in our respective reparations strategies and tactics.

• Have raised awareness, popularised and increased public recognition of key concepts and knowledge produced by the ISMAR including: the Maangamizi, Maatubuntujamaas, Sankofahomes and Maatubuntudunia in Ubuntudunia.

• Through PARCOE established an Afrikan Reparations research partnership working between grassroots scholar-activists and establishment scholars at the University of Boston and the University of Edinburgh - who came together to form the International Network of Scholars and Activists for Afrikan Reparations (INOSAAR) and its youth wing INOSAAR Rep-Afrika. We recommend you also download and read the INOSAAR Principles of Participation as a good model of how reparations activists should engage in co-production with power institutions.

• Supported the candidature of SMWeCGEC Kofi Mawuli Klu who championed programmatic aspects of the SMWeCGEC in his campaign as independent candidate in the 2019 European Parliamentary elections as part of the ‘CEE the Truth’ Campaign, (#CEEtheTruth). One of the 3 aims of #CEEtheTruth was to “develop National Citizens Assemblies on Climate & Ecological Justice to oversee policy making, including those of Planet Repairs embracing Reparations, and have a leading role in shaping a zero carbon Europe”.

• Supported the development of the Glocal Reparations Plans of Alternative Progression known as Pempamsiempango’s in the UK, now emerging in London and Bristol (also being driven by the Afrikan ConneXions Consortium, ACC).

• Through PARCOE has established organisational links with the Ovaherero Genocide Foundation (Namibia), N’COBRA, the National Coalition of Blacks for Reparations in America (USA) and the UBAD Educational Foundation (Belize).

• Co-initiated the Glocal Afrikan Reparations Forum of London (GARFOL) to glocally promote Afrikan Heritage Community engagement with the British public and local and central government structures in London from the standpoint of enhancing efforts towards building Maatubuntujamaas in link with Sankofahomes as part of the building process of Maatubuntuman in Ubuntudunia.

• Established the Maangamizi Educational Trust (M.E.T) as the educational, training and other charitable activities conducive to fundraising arm of the SMWeCGEC.

• Through the M.E.T worked with Bell Ribeiro-Addy MP to establish the All-Party Parliamentary Group for Afrikan Reparations (APPGAR) as promoted in SMWeCGEC postcard campaign. Since the establishment of the APPGAR, the M.E.T shared the running of the secretariat with GARFOL and the African Foundation for Development (AFFORD).

• In order to develop autonomous Afrikan Heritage Community participation in the work of the APPGAR, the SMWeCGEC co-founded together with GARFOL, the APPGAR community link known as the APPGARL action-learning circles where Afrikan Heritage Communities learn to critically engage with state bodies and the UK Parliament as communities of resistance, e.g., the Education and Reparations Circle and the Mbuya Nehanda Afrikan Women & Reparations Circle.

• Supported the formation of the Global Majority Vs Campaign and leant to their legal case knowledge and expertise in advocacy and critical legal praxis, particularly in developing the extra-legal dimension of the case from a law as resistance perspective.

• Contributed to the development of the University of Repair co-initiated by Decolonising the Archive in partnership with Esther Stanford-Xosei (SMWeCGEC), Professor Gus John (Gus John Associates) and Professor Patricia Rodney (Walter Rodney Foundation). 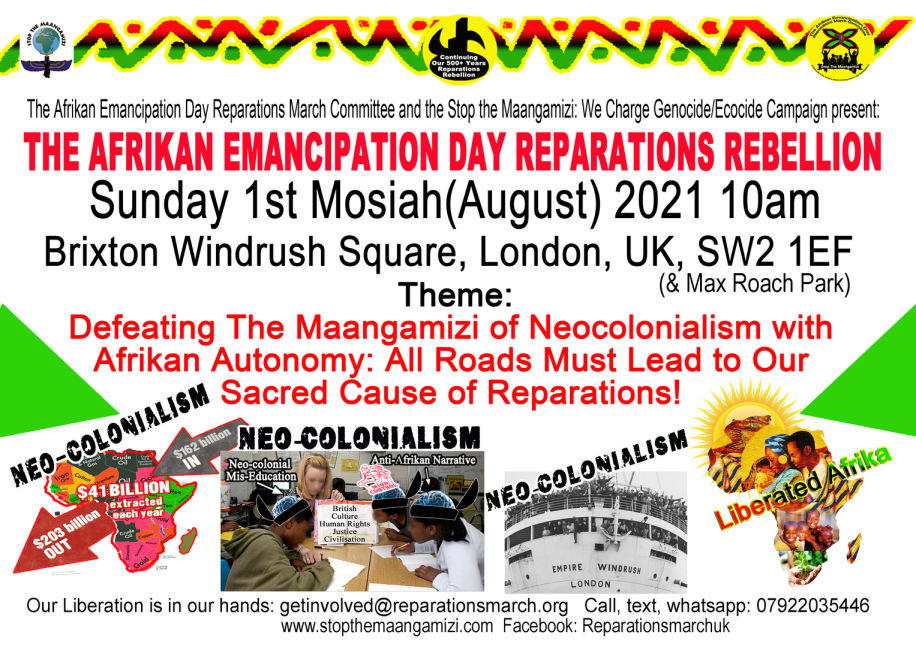 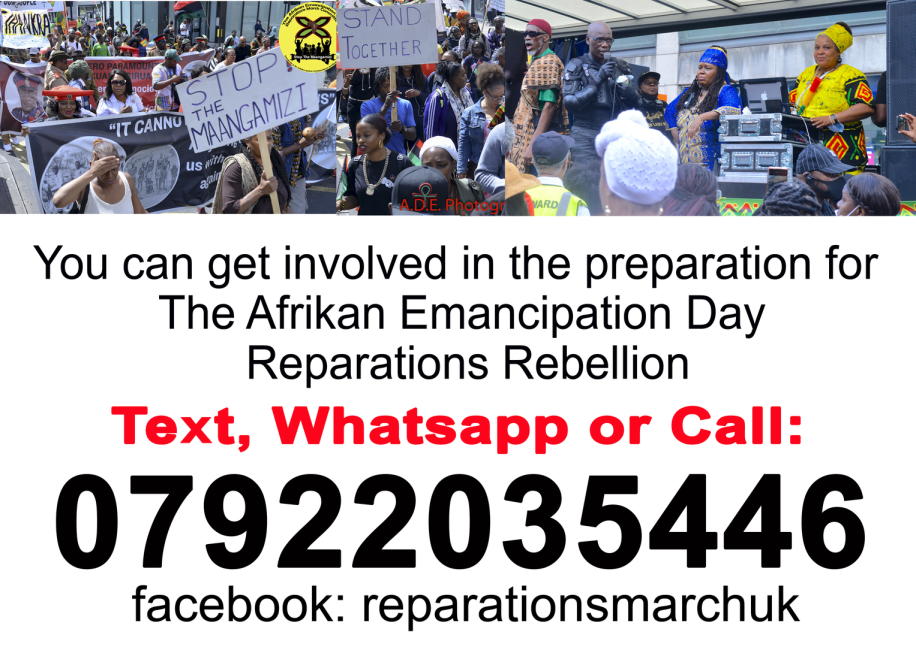 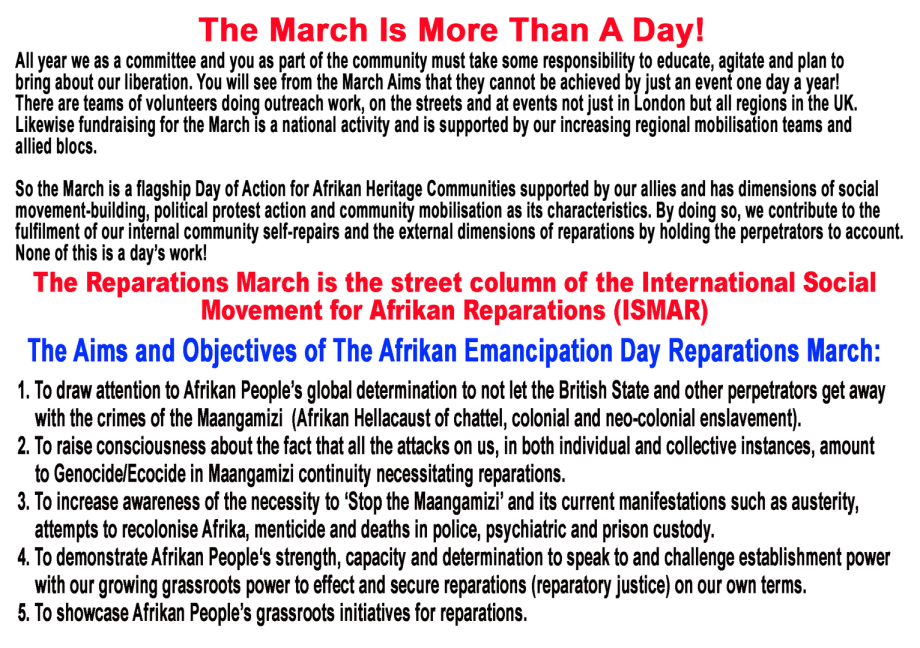 We hope you gain a fuller ovastanding about the purpose of the march, what we seek for our people and how you can get involved in the process.  Please share with your friends and get them to sign the petition on https://www.change.org/p/stop-the-maangamizi-we-charge-genocide-ecocide

Watch This Video to learn the Rationale for the Reparations March 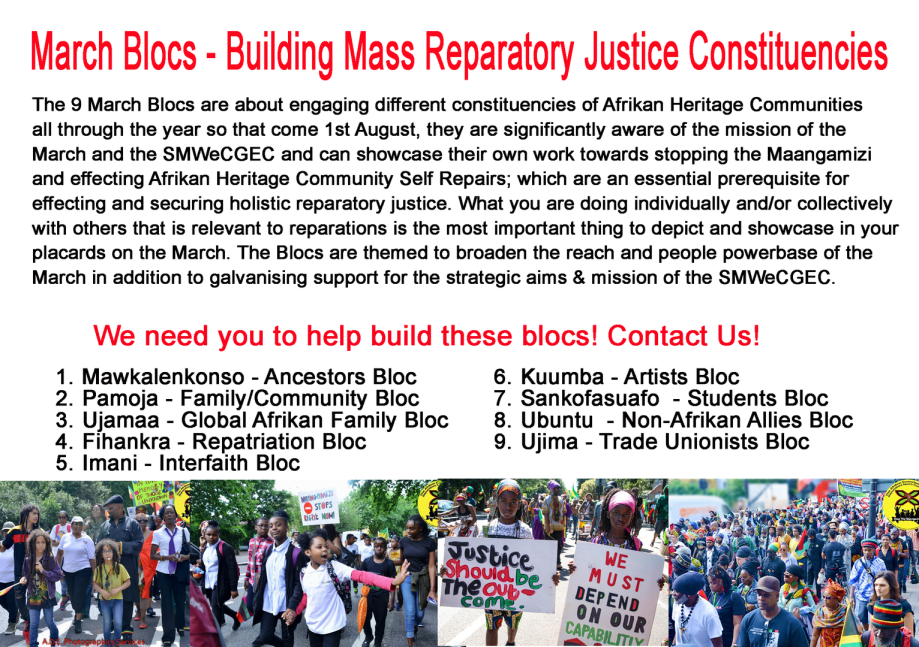 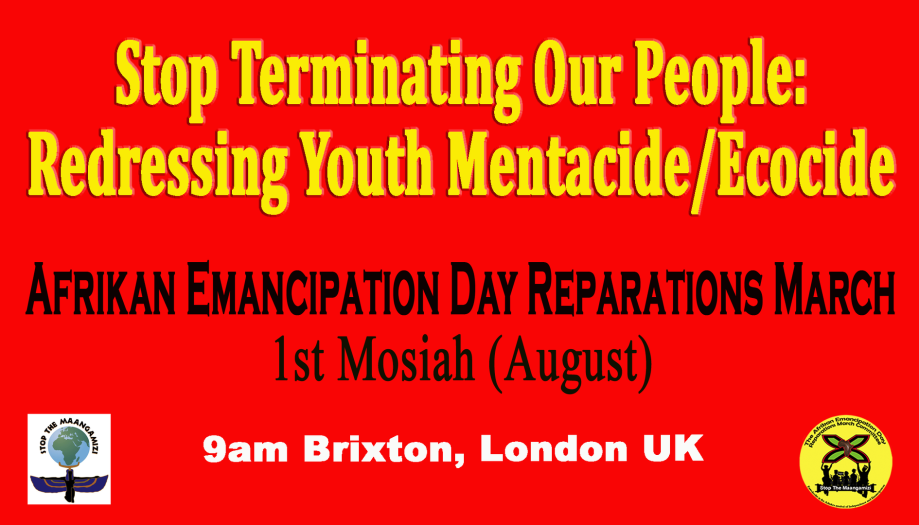 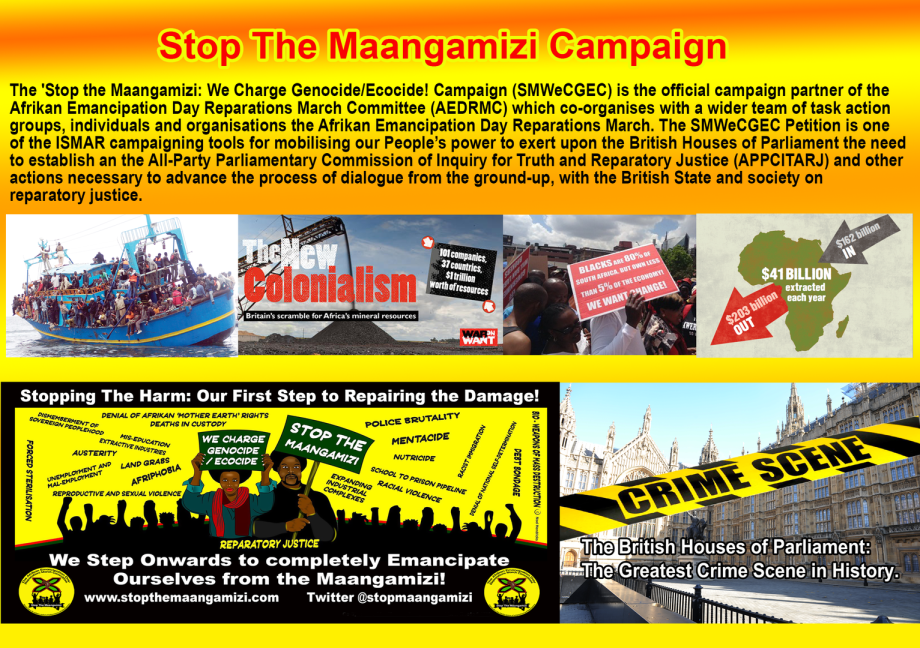 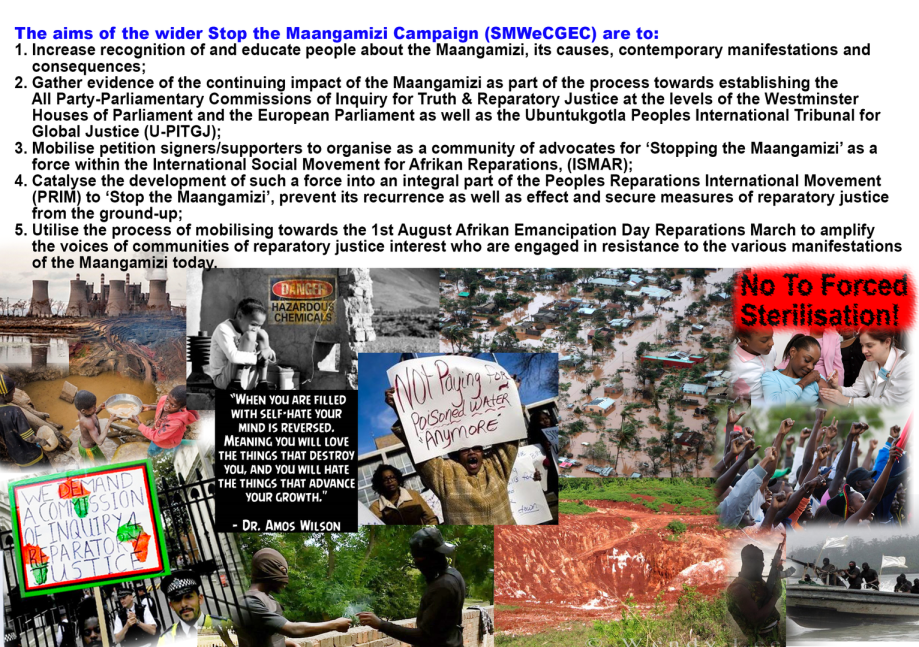 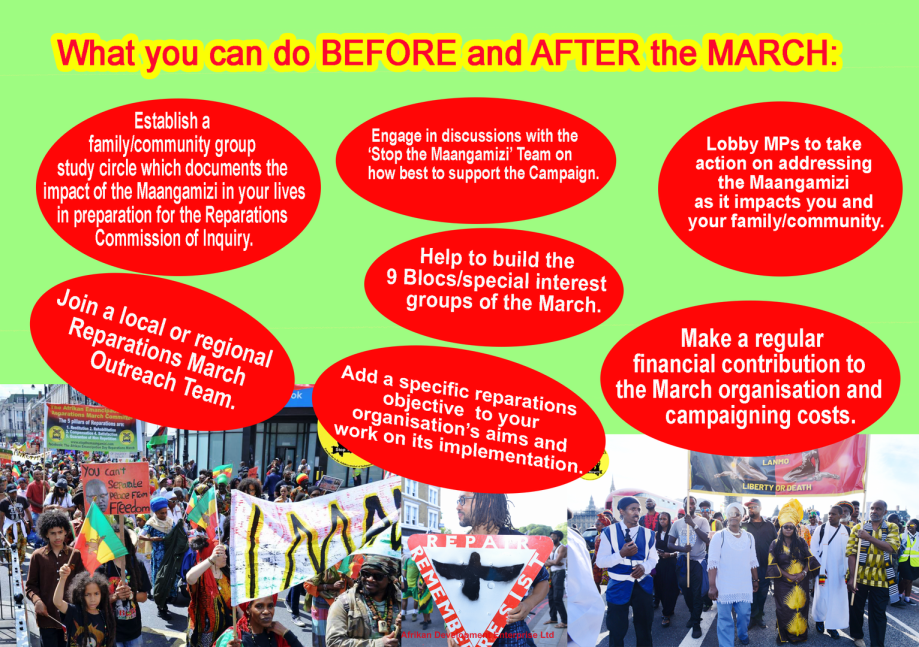 Help us to fundraise for costs towards the march and campaign!

We need your support towards our aims & mission

Please donate by clicking on this Link

My Support for The Reparations Campaign

We thank you all for contributing to this mass show of strength and determination- not just to the State but to each other as we commit to do all we can to STOP THE MAANGAMIZI!

Needless to say the Afrikan Emancipation Day Reparations Rebellion Groundings is an important day of disruption, protest, challenge and for us, a contribution to our education, awareness and self repair. BUT IT IS JUST ONE DAY! We must not lose momentum! We have another 364 days to progress the aims of the Stop the Maangamizi Campaign and other Reparatory Justice activities that we are all involved in.

An International Call to Participate in the 1st Mosiah (August) Afrikan Emancipation Day Reparations March in Conjunction with the Stop the Maangamizi: We Charge Genocide/Ecocide Campaign (SMWeCGEC) 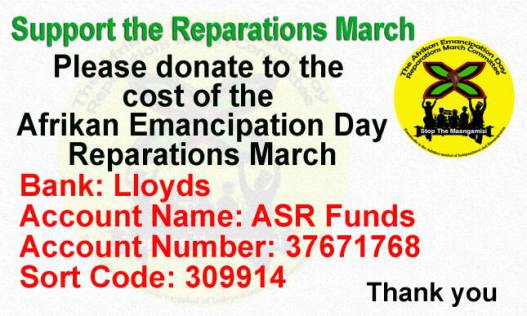 You can contribute via gofundme.com/ukmarch or see our bank details in the photo on your left. A full budget of what is needed is available on the GofundMe site. Click here to donate!

'BE IT RESOLVED THAT THE REPARATIONS MARCH, AS A FORM OF REPARATORY JUSTICE STREET PROTEST, IS BEING MADE IINADEQUATE DUE TO INACTIVITY BY THE MAJORITY OF ITS PARTICIPANTS IN TAKING STEPS TO ADVANCE THE CAMPAIGN FOR REPARATIONS BETWEEN THE ANNUAL MARCHES'

Come and have your say! Frame your arguments for OR against the motion! Stop hiding behind WhatsApp!! 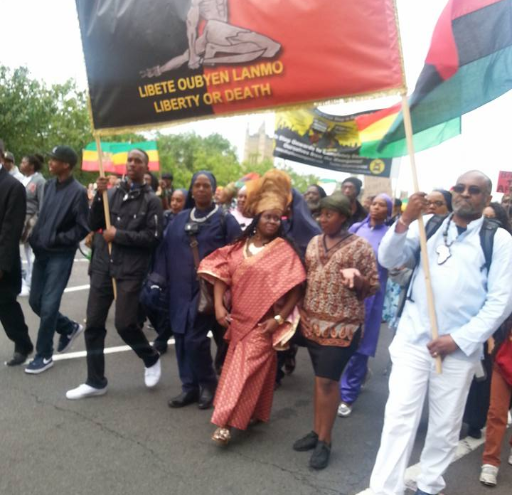 Book your day off!! 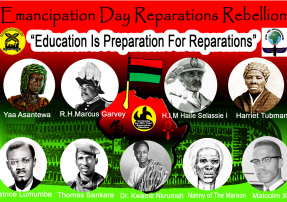 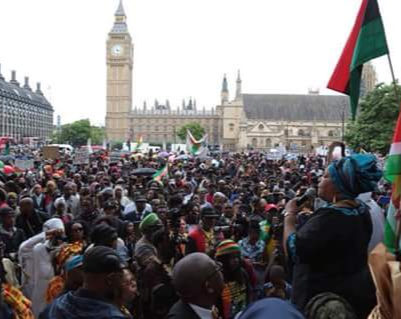